There are more than a thousand civil airports in the world. Some are small and easy to navigate. Others serve over 100 million passengers a year and you dread them for the long lines and connection times. But the biggest airports in the world can often be pieces of beauty which offer plenty of entertainment to passengers.

Which are the biggest airports in the world?

One in Africa, four in Asia, five in the US - prepare for your journey among the world’s airports with the largest area. 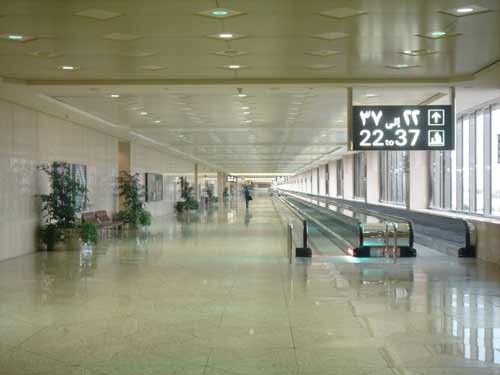 With a total area of 776 sq. km, The King Fahd International Airport, located 20km away from Dammam in the area between Qatif and Dammam, Saudi Arabia, tops the list of the 10 largest airports in the world by size.

Its total area exceeds that of the country of Bahrain!

Most of the property, however, is not put into use. In fact, only 37 square kilometers are dedicated for airport usage - that is only about 5%!

DMM is not particularly busy either - it handles about 10 million passengers a year.

The airport was opened to commercial traffic on 28 November 1999, as it was first used for military purposes. King Fahd International Airport is the main hub for Saudia (Saudi Arabian Airlines), SaudiGulf Airlines, Flynas and Aramco Aviation. 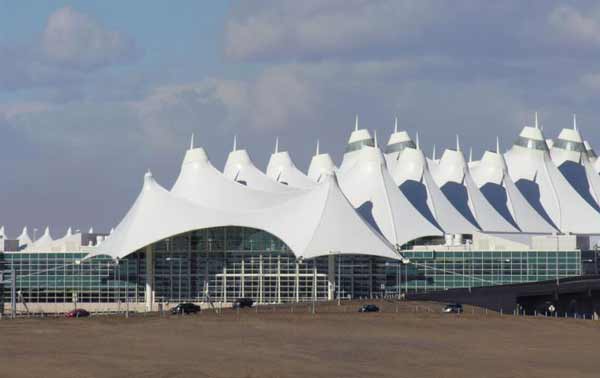 With its 135.7 sq. km, Denver International Airport ranks as the second biggest airport in the world and is the largest one in the US - bigger than the island of Manhattan! DIA is also the fifth-busiest airport in America with service to 205 destinations on five continents.

Denver International is a hub for United Airlines and Frontier and a base for Southwest Airlines.

DIA faced a lot of criticism when it opened in 1995, more than a year behind schedule. It cost an additional $3.3 billion (in today’s US dollars) than anticipated and some of its long-awaited innovative technologies were dysfunctional and later abandoned.

Denver International is perched at 1,655 m above sea-level. This is part of the reason why DIA sports the longest runway in the United States - nearly 5 km long! The extra length helps flights take off in the lower-pressure conditions of Colorado. 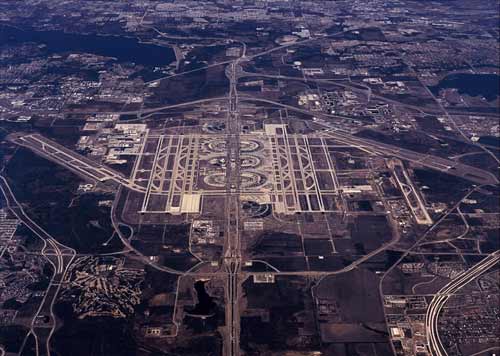 While Dallas-Fort Worth may be much smaller than the two biggest airports, it is still so big, it even has its own ZIP code and Postal Service city designation.

Washington Dulles is the largest airport in the Baltimore-DC area but also the least busy. The airport spans 52.6 sq. km.

It was officially inaugurated in 1962 by Presidents John F. Kennedy and Dwight Eisenhower and received plenty of praise for its light and graceful architecture.

Together with Newark Airport, Washington Dulles is one of United Airlines’ two hubs on the East Coast. United accommodates 61.1% of all passengers on IAD. Many of them travel to the over 125 international destinations served by Washington Dulles.

Orlando International, the fourth largest airport worldwide, used to be an Airforce base until the end of the Vietnam War in 1975. Since then, it has been transformed to a civil-only airport and today is the third biggest airport in the US.

With 27% of passengers on their services, Southwest has by far the largest market share at MCO, almost as much as Delta and American Airlines combined.

The airport is the main hub for Silver Airways and is a focus city for JetBlue, Southwest Airlines, Spirit Airlines.

Beijing Daxing Airport, with its 40.5 sq. km, is the largest single-building airport in the world. It was opened in 2019 and has become the main aviation hub for three major Chinese airlines – Air China, China Southern Airlines (ZNH) and China Eastern Airlines (CIAH) (CEA).

PKX has only one terminal but it is the largest single-building terminal in the world, with five concourses and resembling a starfish from the sky, with four runways.

Formerly known as Houston Intercontinental Airport, IAH is the fifth largest airport in the US and the sixth biggest in the world.

The airport is located about 37 kilometers north of Downtown Houston. The formerly known Houston Intercontinental Airport covers 40.5 sq. km, with a total of five runways.

This is the second biggest United Airlines hub in the US after Chicago O’Hare. True to its name, the airport has connections to 180 international destinations. It is the airport with the highest number of destinations in Mexico - over 30!

Shanghai Pudong is not only the second biggest Asian airport, the seventh largest airport in the world but also the eighth busiest airport, serving international passenger traffic of 76 million.

Located about 30 kilometers east of the city center, Pudong Airport occupies an area of 39.1 sq. km at an elevation of only 4 meters. The airport is also the main hub for China Eastern Airlines and Shanghai Airlines. Pudong Airport has two main and one satellite, a total of three passenger terminals.

Shanghai Pudong International Airport was opened in 1999. The construction of the airport cost 1.67 billion USD and took two years.

The airport was used as an Allied Forces base during World War II. After the end of the war, it was transformed into a civilian airport and the Egyptian Civil Aviation Authority began its administration.

Today, the airport consists of 3 terminals, three runways and is the main hub for two of Egypt’s largest carriers - EgyptAir and Nile Air. 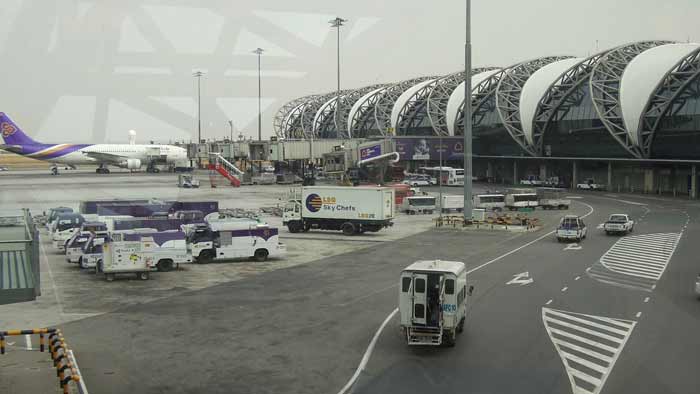 Bangkok Airport’s area is 32.4 sq. km, which makes it one of the largest in Southeast Asia. At 132 m, it sports one of the tallest air traffic control towers. The tower alone cost $18 million and its ATC navigates 76 flights per hour.

In Sanskrit, Suvarnabhumi means “Land of Gold”, a mythical land, not too dissimilar from the Western concept of El Dorado but much closer to Thailand.

Paris Charles de Gaulle Airport, with its 32.38 sq. km, is straight after Suvarnabhumi in the list of the largest airports in the world.

If you would like to see the busiest airports in the world according to Airports Council International (ACI), check out our article on the subject as many of the busiest are not among the biggest and vice versa.